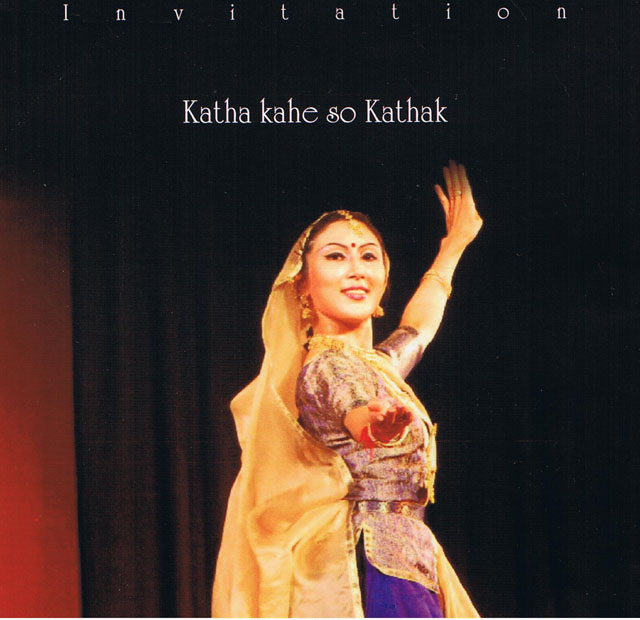 “Japanese kathak dancer enthrals audience.
Rawalpindi:Japanese kathak dancer Masako Sato gave the most scintillating exposition of pure kathak movements and mesmerised a select gathering at the Pearl Continental late Wednesday night.
Ms. Sato, who currently teaches kathak at a reputable Miyabi Kathak Dance Akademy in Tokyo, is a disciple of world known Pandit Birju Maharaj. Masako learned the dance during her stay in India for more than nine years and attained perfection in the most difficult art.
Kathak, derived from Katha, meaning “a story”, expressed in the form classical dance, is one of the most comprehensive and expresive languages of movement in the world.
The Japanese dancer performed in complete balance of mind, body and spirit, during the seven dance numbers she executed in front of fairly large responsive audience that appreciated her skills by clapping at her upright and circular movements as well as rylical and melodic flowings.
Her piece de resistance was her rendering of the Japansese Sakura, dance, she executed in association with Virtuoso sitar player Ustad Ghulam Farid Nizami, who belonged to the house of the most versatile musician of the South Asian Subcontinent.
Well known TV cpmpare Sufia Shahid, on the occation said that the kathak dance by Masako Sato was a wake up call for Pakisitanis to preserve their own cultural traditions and revive in such dancers.” 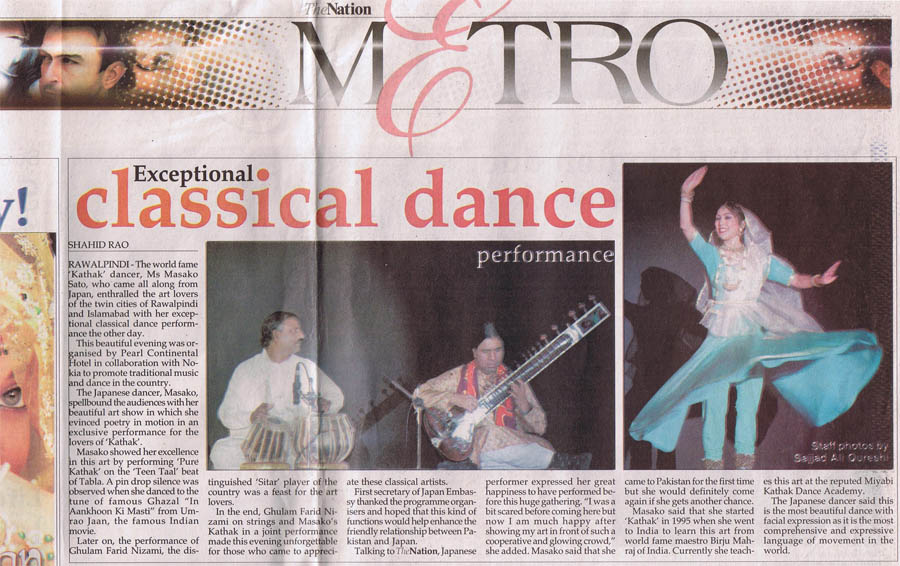 “Rawalpindi : The world fame kathak dancer Ms Masako Sato, who came along from Japan, entrhalled the art lovers of the twin cities of Rawalpindi and Islamabad with her exceptional classival dance performance the other day.
This beautiful evening wad organized by Pearl Continental Hotel in collaboration with Nokia to promote traditional music and dance in the country.
The Japanese Dancer, Masako, spellbound the audiences with her beautiful art show in whichi she evinced poetry in motion in an exclusive performance for the lovers of kathak.
Masako showed her excellence in this art by performing ‘pure kathak’ on the ‘teen taal’ beet of tabla. A pin drop silence was observed when she danced to the tune of famous Ghazal ‘ In Asnkhoon ki Masti’ from Umrao Jaan, the famous Indian movie.
Later on, the performance of Chulam Farid Nzaimi, the distinuished sitar playerof the country was a feast for the art lovers.
In the end, Ghulam Farid Nizami on strings and Masako ‘s kathak in a joint performance made this evening ungorgatable for those who came to appreciate these classical artisits.”

“Kathak at Pearl Continental
The Pearl Continental Hotel Rawalpindi created a history by organizing a Kathak dance performed by Japanese maestro Masako Sato at jam packed and well made Malquee Hall. It was the most unusual and yet divinely scintillating, according to the kathak lovers present in the hall. Masako Sato is a disciple of world-fame Pt. Birju Maharaj of India and is a presently teaching kathak dance at a reputable Miyabi Kathak Dance Academy、Tokyo. Owing to her exceptional skills, she has earned high opinions of pundits and other music lovers from almost all over the world.”